Search for the Lost French Fleet of 1565

Following Cruise 1, the remote sensing portion of the project, the team returned to LAMP headquarters in St. Augustine to conduct post processing, or data analysis, which is a close examination of all the data sets acquired from the different remote sensing instruments. Generally, we are very interested in anomalies that are detected over a good distance and particularly interested in anomalies that occur on adjacent track lines and likely represent the same ferrous mass.

Our goal for Cruise 2 is two-fold:

Image showing an anomaly recorded during the refined survey of Target 1. The flat horizontal blue line is a rendering of the ambient magnetic field in the project area. The trough and peaks to the right of the magnetic field display represent the magnetic anomaly and demonstrates how strongly it stands out from the magnetic norm for this area. Image courtesy of Image courtesy of the Search for the Lost French Fleet of 1565 Expedition, NOAA-OER/St. Augustine Lighthouse & Museum. Download larger version (jpg, 3.6 MB).

Our transit from St. Augustine to the Cape Canaveral area took the better part of the previous day. After a good night’s sleep, we awoke to a stunning sunrise.

After coffee and waking up our first task was to devise a way to sink the magnetometer. Generally, these need to be towed within 20 feet of the seabed in order to get a strong and accurate reading of the magnetic field.

On our first remote sensing cruise, we had our magnetometer towfish tethered to the side scan sonar, an instrument that weights 70 pounds and whose depth is given by the instrument. This we determined was a little bit higher than the depth of the tethered magnetometer.

During the refined survey of our identified targets, we choose initially to go with only the mag and subbottom since the preliminary sonar data had shown only extensive expanses of sand on the seafloor off Canaveral Shores. So without a side scan to weigh down our mag, we had to come up with another system to keep it within 20 feet of the seabed.

We decided to conduct a quick experiment in order to determine and control the magnetometer towfish depth. To do this, we added weights to the mag cable which transmits power to the instrument and sends data to the onboard computer.

The end of the mag towfish and the mag cable with its 12 lbs. weight recovered at the end of the Mag depth control experiment. This was the set up we used for both Target 1 and Target E1. Image courtesy of Image courtesy of the Search for the Lost French Fleet of 1565 Expedition, NOAA-OER/St. Augustine Lighthouse & Museum. Download larger version (jpg, 538 KB).

We started at the 50-foot mark and added a series of weights at about one foot intervals. Then we attached a wrist-mounted diver’s depth gauge to the tow fish and deployed the instrument running at a constant speed of four knots.

After a period of four minutes, we retrieved the mag and examined the depth gauge. We repeated this a number of times, removing some of the weight each time and determined that with:

This is very useful information. It allows us to determine how much weight to have on the cable for different water depths in order to keep the mag within 20 feet of the bottom. For instance, when surveying a target in 35 feet of water we would want to use 32 pounds to bring the towfish to a distance of 12 feet from the seabed. This would obviously be too much weight for surveying a target in 20 feet of water since the mag would be dragging on the seabed. For a depth of 20 feet we would use 12 pounds of weight which would have the mag sink to 17 feet, with a clearance of three feet between it and the seabed.

Having made this determination we then rigged the subbottom profiler. This had been left unrigged during the transit from St. Augustine because the same bracket was used for the vessel’s dual purpose side scan sonar and depth finder. Since the vessel also has a hull mounted depth finder and because we used a considerably more sophisticated side scan sonar, we choose to use the bracket for the subbottom profiler once we arrived in the project area off of Canaveral Shores.

Once we were all rigged and ready and the equipment and software was running we proceeded to the area of Target One. This target was composed of four magnetic anomalies which occurred on adjacent track lines. One of these anomalies was also had a multi-component signature which are often associated with historic shipwrecks. This was the highest-priority target in the project area and so was the first that we resurveyed.

Sunset at the north end of the project area. Image courtesy of Image courtesy of the Search for the Lost French Fleet of 1565 Expedition, NOAA-OER/St. Augustine Lighthouse & Museum. Download larger version (jpg, 254 KB).

Water depth for this target was 28 feet so we decided to use 12 pounds of lead on the mag cable so the towfish would sink to 17 feet and swim 11 feet above the seabed. This would result in very good readings of the magnetic field. We wanted to collect data at a very tight lane spacing of six meters (19.5 feet) so as to be able to produce a highly accurate and detailed contour of the target’s magnetic domain. This would permit us to pick the best locations to dive and ground truth, or test, the target.

During our original survey in Cruise 1, when we had to cover an immense survey area in just seven days, we spaced our lanes 20 meters (65.6 feet) apart, so this refinement survey will give us a much more in-depth understanding of the magnetic signature at this particular target.

Once all the equipment was rigged and in operation, we began to once again “mow the lawn.” This nickname derives from the fact that when surveying, we follow parallel lines to ensure total coverage of the search area, just as we do at home when mowing our lawn!

The first five lines exhibited no magnetic anomalies, but line six had a very distinct one. The next 15 lines all had anomalies indicating that there was considerable magnetic activity within this target cluster. We ran an additional two lines outside the planned survey area in order to completely bracket the magnetic activity. These last two lines had no mag anomalies, indicating that we had full magnetic coverage of this target. Finally we ran a series of five “tie-lines” which run perpendicular to the planned survey lanes to complete the coverage. We finished the Target 1 refined survey at approximately 4:15 pm.

Post-processing magnetometer data at the end of the day after supper. Image courtesy of Image courtesy of the Search for the Lost French Fleet of 1565 Expedition, NOAA-OER/St. Augustine Lighthouse & Museum. Download larger version (jpg, 259 KB).

After, we proceeded a short distance away to Target E1. This target seemed interesting to one of our colleagues, Jeff Enright, a remote sensing specialist working with the archaeological consulting firm SEARCH, Inc.  Since it was close by and the day was passing, we decided to survey that target next.

This target proved less interesting than the previous one. There was very little magnetic activity detected during the resurvey of this target.

As the afternoon wore on, the skies began to get dark and confirmed what weather radar was showing. We just managed to finish the resurvey of this second target of the day, minus the perpendicular tie lines, when the lightning activity and increasing winds made it necessary to recover the survey gear as quickly as possible.

As the wind picked up, we stowed our sun awning and cleared the deck for foul weather. After adding some additional tie downs to gear stowed on the pilot house roof, the storm came on pretty strong. The afternoon became very dark and the seas increased as the wind and rain blew out of the south west. We switched on our running lights and moved in a bit closer to shore keeping the vessel in 50 feet of water in order to get what little cover we could from the land.

Close up of the three-dimensional model of the magnetic field generated by Target 1. Image courtesy of Image courtesy of the Search for the Lost French Fleet of 1565 Expedition, NOAA-OER/St. Augustine Lighthouse & Museum. Download larger version (jpg, 161 KB).

The storm was pretty rough and buffeted us for over an hour before moving off and making space for the remainder of a beautiful sunset. We anchored in about 30 feet of water and prepared to cook dinner.

After dinner, it was time to post process some of the data we had collected that day. I focused on Target 1 since this was the most interesting and highest-priority target in the project area.

After saving all the data as edited files, I created a three-dimensional model of the magnetic field for the target area. The contour model was an interesting one showing a roughly linear magnetic feature representative of our target oriented perpendicularly to the shore line. This is what one might expect from a shipwreck with either its stern or bow pointing towards the shore line.

It had been a long and productive day. After discussing the contour model with the rest of the crew, it was time to turn in. I set my cot up on the back deck port side and lay down to sleep under a rising full moon out to sea. 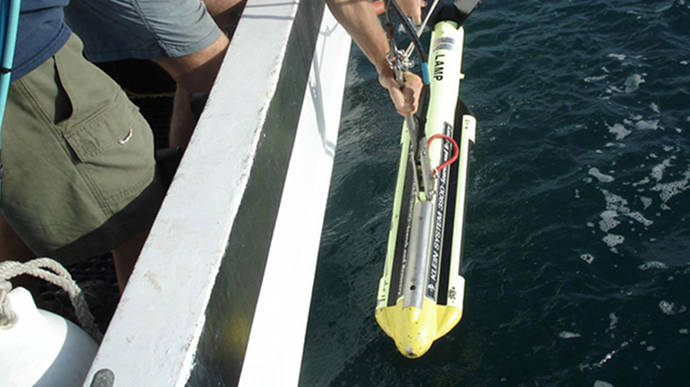 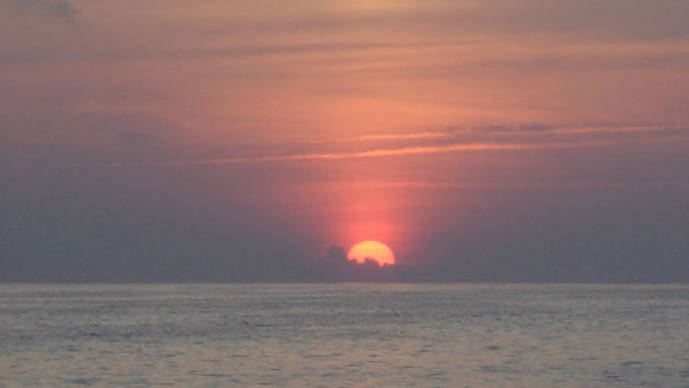 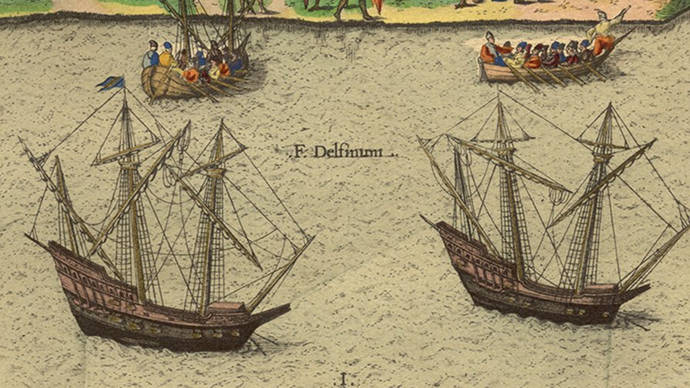 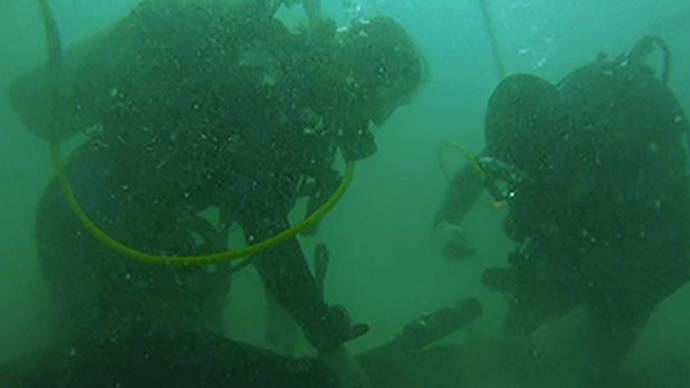