When we talk about “marine mammals,” we actually talk about groups of very different animals with different lifestyles and habitat requirements. This group includes whales that live exclusively in water; seals and walrus, also known as “pinnipeds,” that dive for their food and spend long bouts in the water but who haul out on sea ice or land to rest, molt, and give birth; and polar bears, who are excellent swimmers but are much more adapted to hunting from, and traversing over, sea ice.

An aerial view of a pair of bowhead whales. Image courtesy of Wikipedia. Download image (113 KB).

Bowhead whales are the only baleen whales to live in Arctic waters year-round, and the Western Arctic population is healthy and growing (over 16,000 animals). “Baleen” refers to the large plates hanging from the upper jaw, instead of teeth, that are used as a filtering system. Baleen is made of keratin, the same material that makes up human hair and fingernails. Unlike humpback whales, which take big gulps of prey-filled water and push the water out actively, bowhead whales are “skim feeders”, who move slowly through the water with their mouths open so prey-filled water is constantly moving from the front of their mouth to the back. Small animals like copepods and krill will get caught in the long fringy baleen, where the whale can swipe them off with its tongue and swallow.

Belugas are also Arctic residents and at least two different populations use the Chukchi Sea in summer. Belugas, like killer whales, have teeth and feed on fish or invertebrates. Although Arctic cod is often cited as a preferred food for belugas, they have a very broad diet that can include octopus, cod, salmon, shrimp, and other invertebrates.

With less seasonal sea ice in the summer and fall, the Arctic is being increasingly visited by sub-arctic species. Gray whales have long been summertime residents of the Arctic, and more recently, humpback, fin, minke, and killer whales are spending more time north of the Bering Strait.

As mammals, all whales and dolphins have to come to the surface to breathe, although they can dive for extended time periods. Both bowhead whales and belugas are uniquely adapted to the Arctic: bowhead whales have over a foot of blubber as insulation and the ability to break ice half a meter thick in order to breathe. They are also very long-lived: Inupiat whalers say of bowhead whales that they “live two human lives,” or up to 200 years. Beluga whales do not have a dorsal fin like most dolphins because they live in heavy pack ice that can damage the fin. Both the bowhead and beluga whales are important subsistence food sources for Native Alaskans.

In addition to whales, the Pacific Arctic is home to many species of ice seal (bearded, ribbon, ringed, and spotted seals) as well as walrus. One of the big distinctions in the ecology of these species is where they are feeding. Some species, like the bearded seal and walrus, are mostly bottom feeders and need to dive to the seafloor to scoop up prey such as clams, worms, and crabs. In contrast, ringed, ribbon, and spotted seals mostly feed in the water column on fish like Arctic cod and some invertebrates.

The study region of the Chukchi Borderland is mostly beyond the dive depth limit of the bottom-feeding species, so we are more likely to see more of the pelagic-feeding species.

The loss of sea ice in the Arctic is a big issue for all these species and their energetic maintenance depends on resting phases on the sea ice between diving bouts.

Polar bears, the iconic species of the Arctic, are the marine mammal that causes the most concern with regards to climate change and sea ice loss. The most ice-bound of the marine mammals, polar bears migrate hundreds and thousands of miles across sea ice. While they can swim well and for hours on end, this is energetically costly and cannot be maintained over extended periods of weeks. In addition, polar bear cubs are much less apt swimmers.

Hence, with the loss of sea ice, many polar bears get stranded on land for the summer where they have to switch from their regular diet of seals to include foods such as berries. On land, they also are starting to interact and interfere with land-based bears like brown bears and increasingly come into contact with humans.

During the Healy cruise, a marine mammal watch will be maintained on the ship’s bridge for 18 hours a day to document the occurrence of marine mammals. The long transit from Seward, Alaska, to the Chukchi Borderland study region is a great plus for marine mammal observations. It allows us to document how the community composition changes from the Gulf of Alaska, through the Bering Sea, and up into the high Arctic. 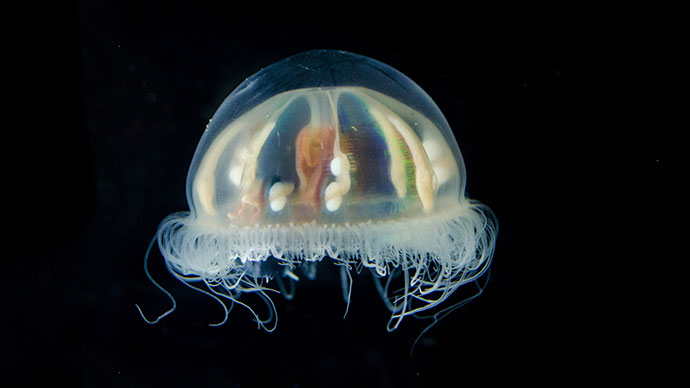 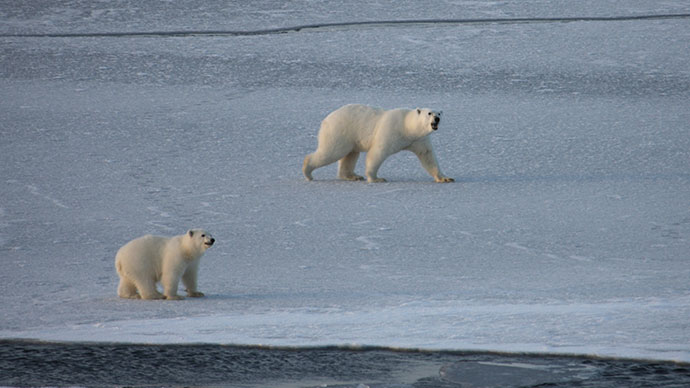 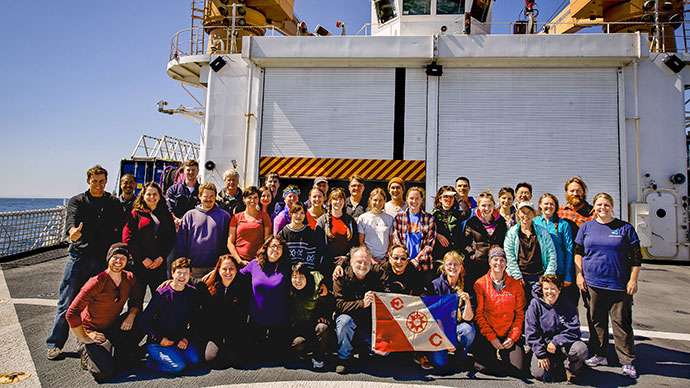