What is the mid-ocean ridge?

The mid-ocean ridge is the most extensive chain of mountains on Earth, stretching nearly 65,000 kilometers (40,390 miles) and with more than 90 percent of the mountain range lying underwater, in the deep ocean.

The nearly continuous, global mid-ocean ridge system snakes across the Earth’s surface like the seams on a baseball. New ocean crust, shown in this map in red, forms along the divergent plate boundaries of the ridge system. This system forms the longest and largest mountain range on Earth, winding its way between the continents. Image courtesy of Mr. Elliot Lim, CIRES and NOAA/NCEI. Download image (jpg, 140 KB).

The massive mid-ocean ridge system is a continuous range of underwater volcanoes that wraps around the globe like seams on a baseball, stretching nearly 65,000 kilometers (40,390 miles). The majority of the system is underwater, with an average water depth to the top of the ridge of 2,500 meters (8,200 feet).

Two well-studied mid-ocean ridges within the global system are the Mid-Atlantic Ridge and the East Pacific Rise. The Mid-Atlantic Ridge runs down the center of the Atlantic Ocean, slowly spreading at a rate of 2 to 5 centimeters (0.8 to 2 inches) per year and forming a rift valley that is about the depth and width of the Grand Canyon. In contrast, the East Pacific Rise is spreading quickly, at rates of 6 to 16 centimeters (3 to 6 inches) per year. Due to the fast spreading rates, there is no rift valley in the Pacific, just a smooth volcanic summit with a crack along the crest that is much smaller than the Atlantic rift valley.

Despite being such a prominent feature on our planet, much of the mid-ocean ridge system remains a mystery. By funding expeditions to spreading centers in the Atlantic and the Pacific, NOAA Ocean Exploration is helping scientists to draw connections between volcanic, tectonic, hydrothermal, and biological systems in order to better understand the Earth’s remarkable, evolving geography. 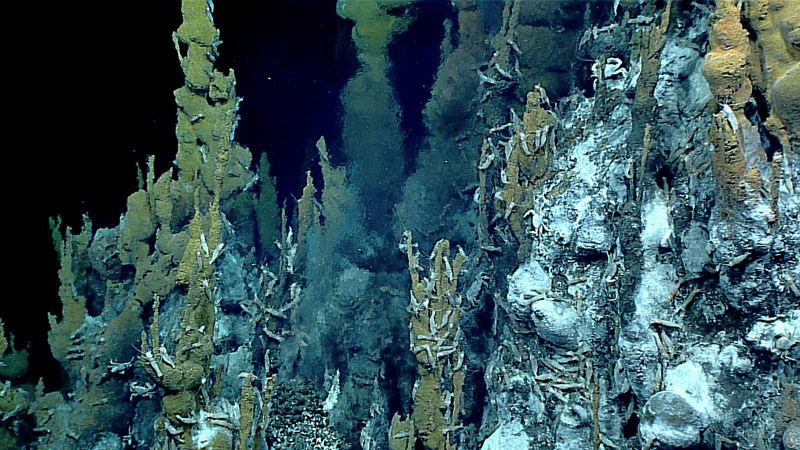