This expedition was the final of three expeditions intended to increase our understanding of the deep-sea environment in the Gulf of Mexico.

Gulf of Mexico 2018 was a 23-day telepresence-enabled expedition to collect critical information and acquire data on priority exploration areas identified by the ocean management and scientific communities. The goal of the expedition was to use remotely operated vehicle (ROV) dives in combination with seafloor mapping operations to increase our understanding of deep-sea ecosystems and collect scientific information to support future management decisions. Major accomplishments from this expedition are summarized below. Download a PDF (2.5 MB) of this summary.

ranging in depth from 305 to 3,010 meters (1,001 to 9,875 feet) to explore the diversity and distribution of deep-sea habitats and associated marine communities in the Gulf of Mexico basin. Operations focused on characterizing deep-sea coral and sponge communities, bottomfish habitats, submarine canyons, shipwrecks, and chemosynthetic habitats such as brine pools, gas seeps, and mud volcanoes. Midwater exploration at depths ranging from 900 to 300 meters (2,952 to 984 feet) was also conducted during two dives to investigate the diversity and abundance of the largely unknown pelagic fauna. Highlights from the dives include:

Described by our resident cephalopod expert as “probably the most bizarre squid I’ve ever seen,” we encountered this unusual squid while exploring an unnamed mound at a depth of ~850 meters (2,790 feet) during Dive 04. Its arms were folded back in what may be a defensive posture, but to such an extreme degree, it had lost its squid-like appearance. Video courtesy of the NOAA Office of Ocean Exploration and Research, Gulf of Mexico 2018. Download larger version (mp4, 33.7 MB).

An overview of cold seeps, including what they are, how they form, how we find them, and their importance as habitat for a unique form of life in the deep sea. Video courtesy of the NOAA Office of Ocean Exploration and Research, Gulf of Mexico 2018. Download larger version (mp4, 119.9 MB).

Collected more than 11.2 TB of data

, including multibeam, single beam, subbottom, ADCP, XBT, CTD and dissolved oxygen profiles, surface oceanographic and meteorological sensors, video, imagery, and associated dive and video products. All of the data from this expedition will be made publically available through national archives.

Looming out of the gloom in the deep water of the Gulf of Mexico, the tug New Hope appears as a long forgotten crumbling relic. With the bow riding proud and a towering smoke stack, the tug sits on the seafloor as if still making way to the next port. Humble, yet powerful, tugs provide aid to vessels in distress, tow barges to move commodities to markets, and assist ships entering and leaving ports. New Hope is a well-preserved example of this vessel class. Video courtesy of the NOAA Office of Ocean Exploration and Research, Gulf of Mexico 2018. Download larger version (mp4, 58.7 MB).

Engaged with audiences around the world

, opening a window to the deep-sea. 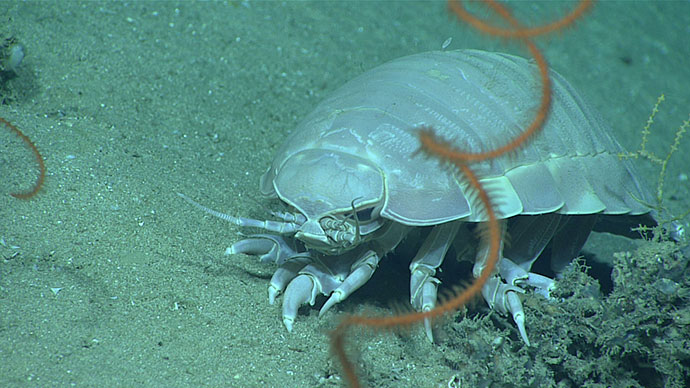