From Aggregations to Individuals: Exploring Migrating Deep-sea Scattering Layers Through Multiscale-multimode Technologies in the Gulf of Mexico

The oceanic rim ecosystem, including waters of the outer continental shelf, is arguably the least-known marine habitat in the U.S. Exclusive Economic Zone (EEZ). Rather than a gradual transition, recent exploratory work has revealed the presence of unique, ecotonal (a transition zone between two adjacent communities) assemblages of high diversity, biomass, and productivity, both in the pelagic and bentho-demersal communities.

The majority of the about 1,500 species known to occur in the Gulf of Mexico (GoM) spend all or part of their lives in the open-ocean pelagic biome, including large taxa (e.g., tunas, billfishes) that are integral to Gulf State fisheries. Endangered toothed whales (e.g., sperm whales), seabirds, and epipelagic game fishes rely on deep pelagic nekton as prey. Mesopelagic fish biomass also constitutes a major component of the global carbon cycle, contributing about one billion tons, which dominates the world’s total fish biomass. Many of these species comprise the ubiquitous scattering layers (SLs) that undergo daily vertical migrations (DVM) of hundreds to thousands of meters and link epipelagic with the meso- and bathypelagic biomes.

The objectives of this mission, funded by the NOAA Office of Ocean Exploration and Research, are to perform system tests and deploy two autonomous platforms (National Geographic Society’s Driftcam and Teledyne Webb Research Slocum glider) to test communication capabilities, sensor performance, and on board sonar processing algorithms. Sampling will be conducted in slope waters (greater than 200 meters (656 feet) water depth) to simplify operations and transit time.

From July 28 to August 1, a multi-institutional science team will set sail aboard R/V Hogarth from St. Petersburg, Florida, to the West Florida Shelf, targeting the 50-meter (164-foot) isobath. The team will perform test deployments of two autonomous sampling platforms, the Driftcam (Figure 1) and Slocum glider (Figure 2), in shelf waters. Pending successful tests, the team will transit further offshore to target the 200-meter (656-foot) isobath and program the Driftcam and glider to conduct a mission at the depths where they will encounter SLs and perform deeper water testing for communication and sensor performance.

The two technologies being tested during this mission will permit access to the deepwater habitats and allow the study of organisms that comprise the SLs without the need to interfere or capture the animals. In particular, the two methodologies being implemented will allow researchers to non-invasively explore the animals that inhabit the mesopelagic regions of the ocean while also collecting important data about their composition and behavior. The shipboard echosounder system (Simrad EK80) will be used to locate and identify the depths of the SLs and serve as the bird’s eye view of the organisms in the water column. The Driftcam and glider will then be programmed to target those SLs and explore the animals that are part of this feature.

The Driftcam is configured with a high-definition/low-light video capture system (Nocturn XL, Photonis, MÅLerignac, France) that will be used to capture imagery to identify the community composition of the mesopelagic SLs and to aid in the interpretation of the acoustic data collected. The Driftcam will communicate with the ship to provide location and status and to receive commands for correcting or changing the vertical position relative to the SLs.

The Teledyne Webb Research Slocum Glider (TWRSG) is configured with a custom science bay that contains a new Simrad EK80 Wide Band Transceiver (WBT) Mini echosounder and 200 kilohertz transducer (Figure 2). The echosounder will be programmed to collect high-resolution acoustic backscatter data on the descent or hovering phases of the TWRSG. The glider has been outfitted with an on-board processor to compute backscattering statistics and transmit back to the ship via the ARGOS satellite system. Access to the near-realtime data will allow researchers to adjust the sampling plan of the glider and better ascertain the dynamics of the SLs. Moreover, these data can be used to modify the position of the Driftcam within the water column. 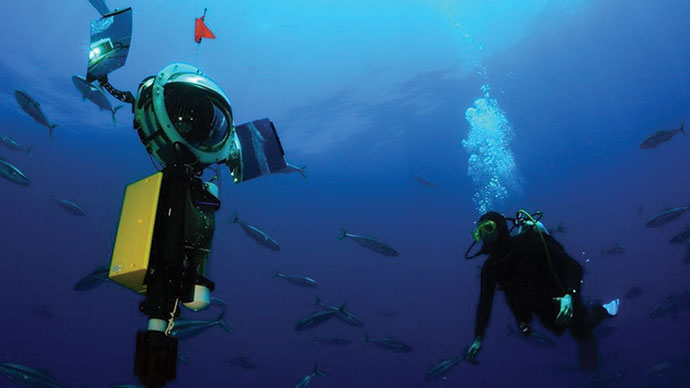