The USS Bass. The photo is signed by Fleet Admiral Chester W. Nimitz, who was Commander of Submarine Division 20, circa 1930s. Image courtesy of the Naval History and Heritage Command. Download larger version (jpg, 571 KB).

The USS Bass (V-2), designed by the Electric Boat Company, was launched on December 27, 1924, at Portsmouth Naval Yard, Kittery, Maine, and commissioned on September 26, 1925. At the time, the Bass, ~99 meters (326 feet long) at the waterline and ~8.3 meters (27 feet, 6 inches) in the beam, was the largest submarine ever built for the U.S. Navy. She had six 53-centimeter (21-inch) torpedo tubes (four in the bow and two in the stern) and a 12.7-centimeter (5-inch) deck gun. The Bass and her sister ships, the V-1 (USS Barracuda) and V-3 (USS Bonita), were designed as fast fleet submarines capable of surface speeds of at least 21 knots. Although the Bass and her sister ships underperformed, they were fitted with partial diesel-electric propulsion systems that were later further developed, standardized, and routinely fitted into subsequent U.S. submarines. The “V boats” (of which there were nine in total) were the only U.S. submarines built in the interwar period.

During her career, the Bass served in Submarine Division 20 on deployment in the Atlantic, Caribbean, and Pacific. She failed to achieve her intended operational performance (neither for seaworthiness nor speed) and was decommissioned at Philadelphia in February 1937. Recommissioned out of necessity during World War II, the Bass operated off New England in 1941, and then in the Pacific and Panama Canal Zone in 1942.

Tragically, a fire in her battery room and aft torpedo room in August 1942 killed 26 of her crew. She was subsequently turned into a cargo carrying submarine, and then used for experiments in Long Island and Block Island in 1944. Finally, on March 12, 1945, the Navy used the Bass as a target to test a top secret acoustic homing torpedo – the Mark 24 – which was capable of being deployed from aircraft and then tracking submarines at depth. The Navy had developed this torpedo during World War II and put it into operation even before fully completing airborne testing. The USS Bass was relocated in the 1960s and now rests in ~47 meters (155 feet) of water. Advanced SCUBA divers occasionally visit the site.

During the 2019 Technology Demonstration, the Bass was mapped for the first time using synthetic aperture sonar (SAS), revealing that the submarine is split into two parts. The main portion of the submarine, which extends from the stern to a point forward of the conning tower, is approximately ~75 meters (245 feet) long. Although large sections of the outer hull are missing, the pressure hull and outer hull frames are generally intact. The aft hatches, including the stern torpedo loading hatch, are visible in the SAS imagery, as are the propeller guards, dive planes, several compressed air flasks, gun mount support, and conning tower. An approximately 24-meter (80-foot) section of the bow of the Bass rests on its port side about 7.6 meters (25 feet) to the south. A scour has formed around the prow. The outer hull plating on this part of the wreck is intact in some areas and absent in others. The forward torpedo loading hatch is visible.

Rhode Island possesses one of the most important collections of early American submarines. New SAS imaging of the wrecks, including imaging collected last year by the NOAA Office of Ocean Exploration and Research, Kraken Robotics, and the University of Rhode Island Applied History Lab, is helping archaeologists assess the condition of these subs and potential for further study.

Synthetic aperture sonar image of the USS Bass collected using the towed KATFISH™ system. In the image, it is clear that the submarine is split into two parts. Image courtesy of ThayerMahan, Inc., Kraken Robotics, and the NOAA Office of Ocean Exploration and Research. Download larger version (jpg, 13.2 MB). 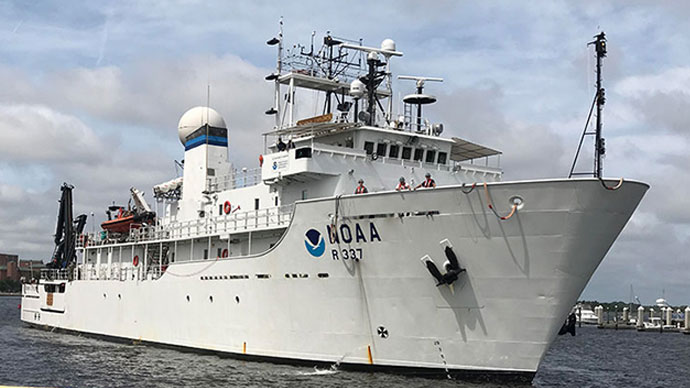 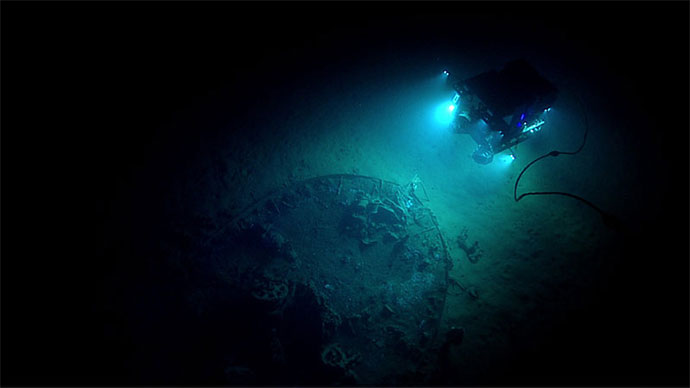 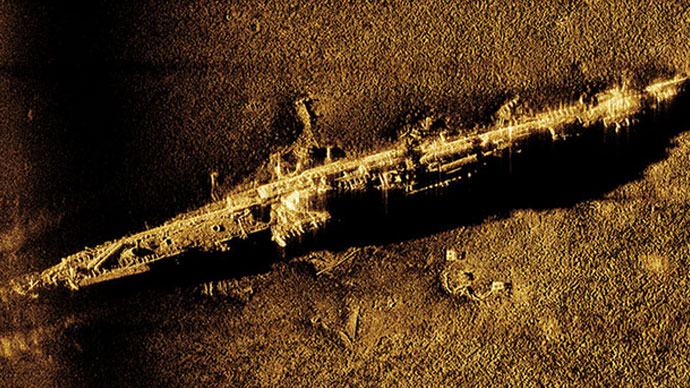 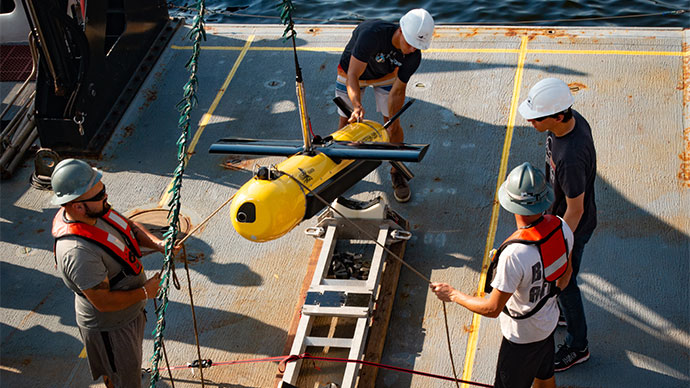