Aquarius 2010: If Reefs Could Talk

From October 12 to 21, 2010, NOAA’s Office of National Marine Sanctuaries hosted Aquarius 2010: If Reefs Could Talk, a research and education mission sponsored by AT&T. This mission took place in the Florida Keys National Marine Sanctuary (FKNMS) and brought the science of ocean conservation and the underwater world to the public during live internet broadcasts.

A Laboratory Under the Sea

At the time of this writing, NOAA’s Aquarius undersea laboratory is the only undersea habitat in the world devoted to science. The habitat, owned by NOAA and managed by the University of North Carolina at Wilmington, is stationed about 18 meters (60 feet) below the surface at the base of a coral reef in the FKNMS. Scientists live in Aquarius during extended missions to study and explore our coastal ocean, 6.5 kilometers (4 miles) from shore.

Aquarius was originally designed and funded by NOAA's National Undersea Research Program (now part of NOAA’s Office of Ocean Exploration and Research) in the mid 1980s and has life support systems that allow up to four scientists and two technicians to live and work underwater, in reasonably comfortable living quarters, for missions lasting up to 30 days.

The Aquarius underwater research station is positioned at the base of a coral reef in the Florida Keys National Marine Sanctuary. It is about 18 meters (60 feet) below the surface. Image courtesy of NOAA Okeanos Explorer Program, Aquarius 2010: If Reefs Could Talk. Download larger version (jpg, 85 KB).

As part of Aquarius 2010: If Reefs Could Talk, this mission will include multicultural and bilingual program elements. Outreach and education efforts will target students in traditionally underserved and underrepresented communities with activities and information designed to bolster knowledge in science, technology, engineering, and math. Daily, interactive shows will be webcast in English and Spanish. The National Association of Black Scuba Divers and the Multicultural Education for Resource Issues Threatening Oceans program will help coordinate broadcasts.

Aquarius 2010: If Reefs Could Talk is designed to relay scientific study of biodiversity, climate change, and technology to a global audience, and to help the public learn what they can do to protect our world’s most important resource — the ocean.

The Aquarius habitat increases working bottom time to nearly ten times over what scientists typically obtain using conventional surface-based diving techniques. At the end of each mission, aquanauts go through a 17-hour decompression, where the pressure inside Aquarius is slowly reduced from the pressure at the habitat's storage depth of 15 m (50 ft) (ambient) to surface pressure, allowing the divers' tissues to regain surface equilibrium. The habitat is then repressurized to ambient depth, and the aquanauts are able to don scuba gear, swim out of the habitat, and ascend to the surface — as if they had just performed a short dive to 15 m (50 ft).

Additional advantages provided by the Aquarius include sophisticated power and communication capabilities. Scientists have email, telephone, and video conferencing capabilities to anywhere in the world. Aquarius has successfully supported more than 90 missions between 1993 and 2005.

You can follow the Aquarius 2010: If Reefs Could Talk mission at: https://sanctuaries.noaa.gov/missions/2010aquarius/welcome.html 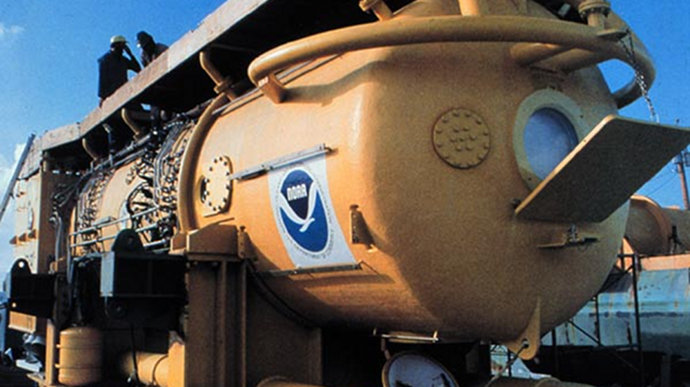