Environmental DNA in the Abyss

The DeepCCZ team has now completed our surveys of APEI 7 (Area of Particular Environmental Interest 7), at the southeastern margin of the region we plan to sample. We’ve executed successful deployments of baited cameras systems, baited traps, large-volume seawater pumps, respirometer and microprofiler in situ sensor (and experimental) systems, and remotely operated vehicle (ROV) transects across the seafloor to survey and collect invertebrates and vertebrate animals in this remote and never-before studied abyssal ocean habitat.

This is technical and difficult work, demanding an integrated and collaborative team of engineers, biologists, and data management experts to successfully complete baseline surveys in the region. One thing that comes to mind is—Gosh this is hard! Could there be an easier way to survey the animals living in this remote and difficult-to-sample habitat? And if so—what would that approach look like?

Many biologists in aquatic (freshwater) ecosystems are now using DNA sequencing of environmental DNA (eDNA) to monitor animal assemblages and assess ecosystem health. For example, eDNA approaches are being used to detect invasive species soon after their arrival in new ecosystems, when they may be present at low densities, and to assess the response of animal communities to human disturbance (habitat changes, altered water quality).

eDNA methods are increasingly being applied to study animal assemblages in the ocean too, but well-validated studies remain rare, and the technique has been used very little in the deep sea. Because the deep sea is spatially vast, is home to a very high diversity of animals, and is remote and difficult to sample, it is challenging to comprehensively sample the communities that inhabit the abyssal ocean. eDNA methods may complement existing survey techniques and reveal species that are not found using other survey methods due to small body size, cryptic habitat, or integrating observations over larger spatial areas or longer temporal scales. eDNA surveys are also considerably easier to execute than assembling the dream team of scientific and technical talent that we have on board for this DeepCCZ expedition.

A sediment core being processed in the lab following return of the ROV to the sea surface. Image courtesy of Oliver Kersten. Download larger version (jpg, 92 KB).

Our team aims to use eDNA approaches in these baseline surveys of the western Clarion-Clipperton Zone (CCZ) to survey the diversity of invertebrate and vertebrate (fish) animals, prior to the polymetallic nodule mining in the region. In order to do this, we’ve been busy collecting environmental samples, in the form of seawater collected from the sea surface to the seafloor (five meters below the sea surface to five meters above the seafloor); sediments collected in push cores by the ROV; and hopefully also manganese nodules, which we expect to host a unique assemblage of animals in comparison to the soft sediment communities we sampled on the abyssal plain in APEI 7.

So far, we’ve conducted five conductivity-temperature-depth (CTD) casts to collect our seawater and have filtered more than 450 liters from the abyssal plain and seamount in APEI 7. We were able to conduct one CTD cast in the same seamount summit location as Jeff Drazen’s baited camera lander—and we will be very interested to see if we detect the cutthroat eels he observed just a few days earlier at the same site. We have also collected sediments from both the abyssal plain (two ROV dives) and one seamount summit ROV dive in APEI 7—to assess the communities present in these bathymetrically distinct habitats. One key strength of this study is that we will compare our eDNA results to results of the other animal surveys being conducted by DeepCCZ scientists onboard.

We are looking forward to more mud-busting and seawater filtering in the APEIs to come! 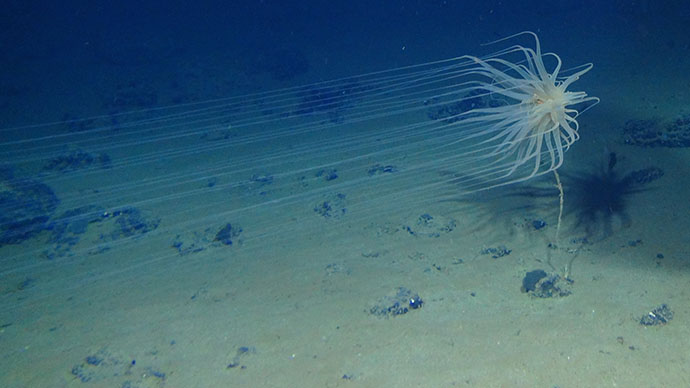 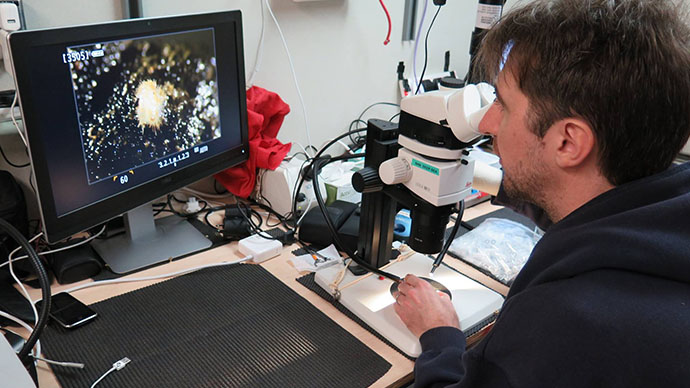