Celebrating International Day of Women and Girls in Science

“We need science, and science needs women. This is not only about making a commitment to equal rights; it is also about making science more open, diverse and efficient.” — UN Women

In December 2015, the United Nations General Assembly signed a resolution designating February 11 as the annual International Day of Women and Girls in Science  to recognize the critical role women and girls play in science and technology and to promote full and equal access to and participation in science for women and girls.

At the NOAA Office of Ocean Exploration and Research (OER), women are an integral part of the work being accomplished every single day. But today, February 11, we are taking a moment to reflect on contributions women members of the OER team have made to our mission to explore the ocean by sharing just a few web highlights from over the years.

As a program coordinator for OER, Caitlin focuses on organizing OER’s Atlantic Seafloor Partnership for Integrated Research and Exploration (or ASPIRE) campaign, coordinating ship time needs across the office and serving as the executive secretary for the Interagency Working Group on Ocean Exploration and Characterization, among other things. In 2018, she had the unique opportunity to dive in the human-occupied vehicle, Alvin, during the DEEP SEARCH 2018: DEEP Sea Exploration to Advance Research on Coral/Canyon/Cold Seep Habitats expedition. 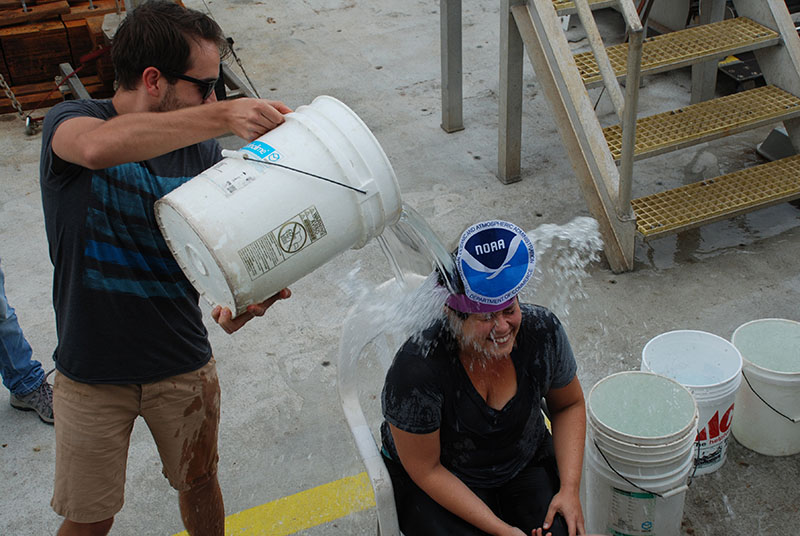 Since joining OER in 2012, Kasey has coordinated over a dozen expeditions and projects, including multidisciplinary expeditions to the Atlantic submarine canyons, the Mariana region, the Pacific Remote Islands Marine National Monument, Glacier Bay National Park, and offshore the southeastern United States. As she transitions into a new role as operations chief, this year Kasey will also be training new OER expedition coordinators on how to plan and coordinate remotely operated vehicle (ROV) expeditions on NOAA Ship Okeanos Explorer. While there probably isn’t a “typical” day for Kasey, take a moment to learn more about “a day in the life of an ocean explorer.”

After completing the 2017 Sea Grant Knauss fellowship with the office, Adrienne joined OER as a physical scientist. Her specialization lies in using active and passive acoustic collection methods to understand animals in the water column. In addition to currently managing OER’s federal funding opportunity (FFO), Adrienne manages the office’s water column exploration and biological acoustic priorities, using sound and other techniques to explore the water column. In this role, she has the important responsibility of calibrating the split-beam sonars on Okeanos Explorer, which allows scientists to not only know that something is in the water column, but also to be able to accurately quantify the characteristics of the object.

Katharine joined OER in 2019 as a Sea Grant Knauss Fellow and stayed on with OER once her fellowship was completed. In her current role, Katharine is leading OER efforts to define the exploration variables needed to initially explore an area and is helping to explore the use of 'omics, in particular eDNA, to increase our understanding of the ocean. Her background in geospatial analysis, spatial predictive modeling, and coral-reef ecology are allowing her to make key contributions to mapping, exploring, and characterizing U.S. deep waters.

Kim served as one of the science leads for the 2019 Southeastern U.S. Deep-Sea Exploration expedition and, after finishing her doctoral degree in marine geology and geophysics at the University of Miami, she became a permanent member of the OER team in 2020. This year, she’ll be getting her feet wet (not literally) as an expedition coordinator for the ROV expedition planned to explore the New England Seamounts and the Corner Rise Seamounts in the high seas of the Atlantic in June and July of this year. Learn more about Kim’s expertise and interest in how deep-sea coral can serve as “living geology,” continuously shaping the seafloor.

Shannon first joined OER as an explorer-in-training in 2010 — and we were lucky enough to have her join the OER team full time as an expedition coordinator in 2018. On shore, Shannon works at the Center for Coastal and Ocean Mapping/Joint Hydrographic Center at the University of New Hampshire to coordinate mapping expeditions and equipment, process and archive data, and collaborate with other scientists. While at sea as a mapping expedition coordinator, Shannon leads a field team dedicated to collecting acoustic data from Okeanos Explorer and produces maps of seafloor and water column features to guide exploration. One of her favorite exploration moments was while performing a routine test ROV dive, the team happened upon a shipwreck, which is like finding a needle in the haystack. 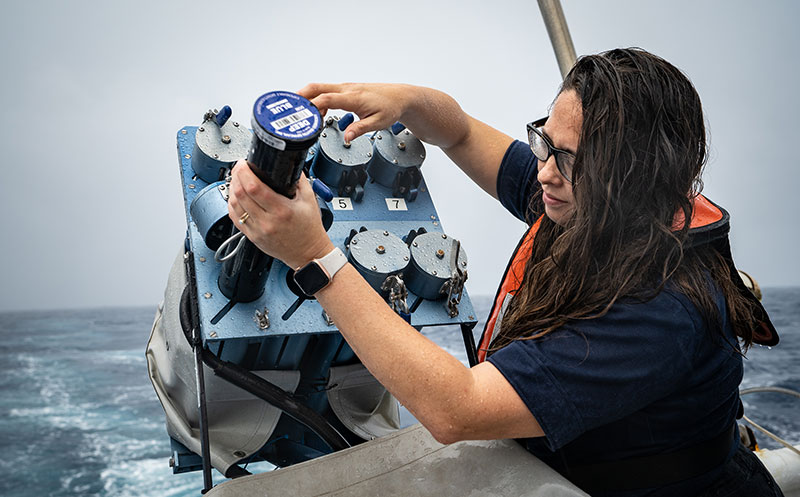 Shannon replenishes the expendable bathythermographs (XBTs) in the XBT auto-launcher. The XBTs collect temperature data about the water column and, when combined with historical salinity profiles from the World Ocean Atlas, allow the mapping team to generate sound velocity profiles that are applied to the multibeam mapping data. The XBT auto-launcher was designed by the NOAA Atlantic Oceanographic and Meteorological Laboratory and enables remote launches of XBTs by personnel on the ship or on shore. Image courtesy of the NOAA Office of Ocean Exploration and Research, 2019 Southeastern U.S. Deep-sea Exploration. Download larger version (4.8 MB).

As an OER senior expedition coordinator for mapping, Meme has led or sailed on over 30 expeditions on NOAA Ship Okeanos Explorer. When working on shore, she is located at the Center for Coastal and Ocean Mapping/Joint Hydrographic Center at the University of New Hampshire, where she plans Okeanos Explorer mapping operations and expeditions, leads OER’s team of seafloor mapping scientists, facilitates data archival procedures with NOAA’s National Centers for Environmental Information, and collaborates with other scientists and partners on Okeanos Explorer expeditions. Meme has played a critical role in leading the development of telepresence mapping AND in encouraging the next generation of ocean explorers by serving as a mentor to numerous explorers-in-training. 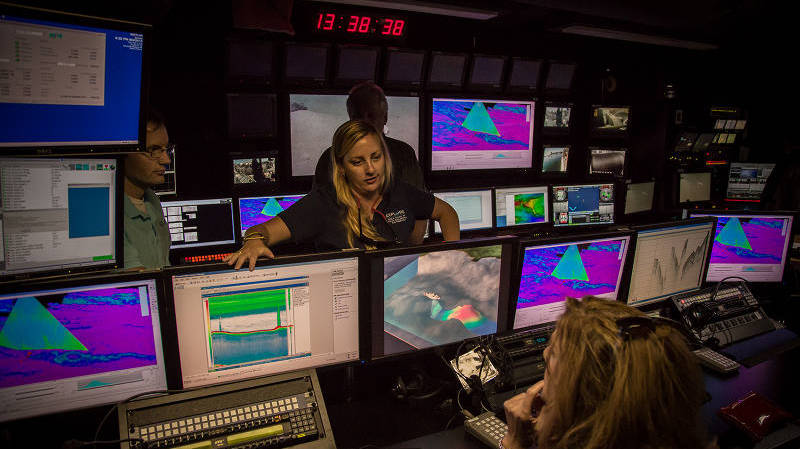 Meme explains to a group of members of the public touring the ship how Okeanos Explorer sonar systems acquire data and describes some of discoveries made using the sonar systems, including hundreds of gas seeps along the eastern seaboard. Image courtesy of the NOAA Office of Ocean Exploration and Research, Exploring Atlantic Canyons and Seamounts 2014. Download larger version (1.9 MB).

Kelley has been with OER since 2004 and has spent more than a decade planning and managing at-sea projects and expeditions to explore the deep ocean around the globe, with the majority with the science team participating remotely from shore via telepresence. Having just completed an intensive NOAA leadership development and training program where she served in leadership roles across NOAA, she is excited to be back in OER and taking on a new role as deputy chief supporting the office’s Expeditions and Exploration Division. Her passion for the ocean was inspired when she took her first breath underwater SCUBA diving and was solidified during the 2005 Hidden Ocean Expedition, when scientists conducted the first interdisciplinary baseline survey of the diversity of life in all realms of the ice-covered Arctic Ocean. 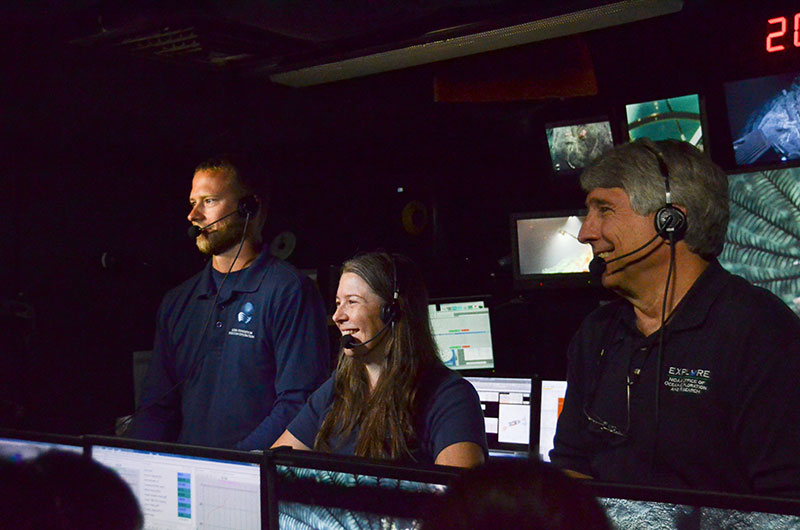 Kelley and fellow explorers conduct a live interaction with visitors at the Exploratorium in San Francisco, California, while conducting a deep-ocean ROV dive from offshore of Johnston Atoll in the Pacific. Image courtesy of the NOAA Office of Ocean Exploration and Research, 2017 Laulima O Ka Moana. Download larger version (11.1 MB).