EX1101 was NOAA Ship Okeanos Explorer’s first cruise of the 2011 field season. It was focused on ship shakedown and sonar patch testing in order to prepare for the coming field season. It provided an opportunity to get the ship underway and ensure that all of its systems and equipment were fully operational prior to integration of the ROV on board. Additionally, the cruise provided an opportunity to conduct bathymetric mapping to support the work of other NOAA offices and to select specific dive targets for use in ROV testing during subsequent cruises.

Getting the ship ready for fieldwork after several months in dry dock is a complex challenge. The shakedown cruise provides an opportunity for the ship’s crew to ensure that all the equipment, machinery and gear are functional, seaworthy, and operating safely. It also provides an opportunity for the ships scientists to test and assess the performance of scientific equipment and instrumentation. During this cruise, the EM 302 (30 Khz) multibeam sonar, EA 600 (12 kHz) singlebeam sonar, and Knudsen sub-bottom profiler were tested.

EM 302 multibeam sonar performance was evaluated during this cruise and determined to be satisfactory. Given that environmental and instrumental errors impact portions of the swath coverage of the multibeam sonar differently, an optimal method for evaluating system performance is to run a number of overlapping survey lines in a procedure know as a patch test. After imaging the same “patch” of seafloor multiple times differences in each survey line can be isolated and attributed to environmental or instrumental errors which can then be documented and in some cases corrected for. This detailed assessment of the multibeam sonar at the start of the field season is necessary to document system capabilities, optimize settings for the season, and diagnose any problems arising from changes in hardware or software over the winter dockside period. 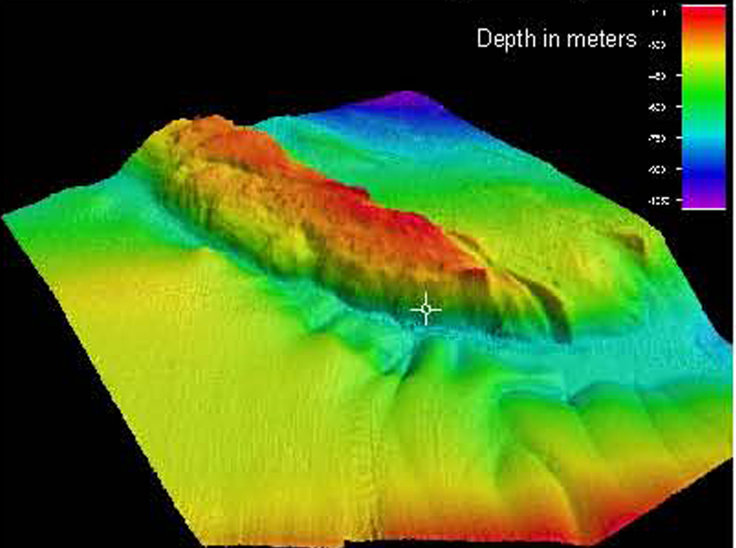