The shelf break and slope off the northeastern U.S. support a diversity of habitats, including more than 70 canyons ranging from depths of approximately 100 meters to 3,500 meters. The topography, currents, and sedimentation in and around these submarine canyons can be quite complex, creating “biodiversity hotspots” which support a wide variety of species including unique deep-water corals and commercially relevant fish stocks.

Although a limited number of these canyons have been studied previously, most are poorly known and are of significant interest to regional stakeholders as well as federal and state agencies with research and management responsibilities.

When combined with previously collected Okeanos Explorer data, survey mapping conducted during this expedition is expected to result in near-complete bathymetric coverage of the seafloor from the 200-meter contour to existing Extended Continental Shelf (ECS) data between Cape Hatteras and the U.S.-Canadian territorial boundary. Additionally, this expedition will yield seafloor backscatter, water column, backscatter, and sub-bottom profile data within the planned survey areas.

Data from this and preceding ACUMEN expeditions will be used by the NOAA Office of Ocean Exploration and Research, NOAA National Marine Fisheries Service, and other NOAA science partners in planning Okeanos Explorer telepresence-enabled remotely operated vehicle expeditions to continental shelf canyons scheduled for the summer of 2013.

All data from Okeanos Explorer cruise EX1206 were post-processed and publicly released by the National Geophysical Data Center on December 20, 2012, 30 days after the conclusion of the cruise. The data can be accessed via the NOAA Ocean Exploration Data Atlas. 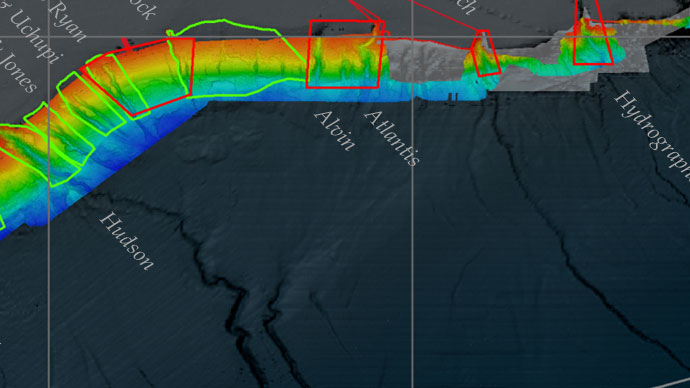