NOAA Ocean Exploration will begin the 2021 operations aboard NOAA Ship Okeanos Explorer with a 25-day expedition, April 16 - May 10, to assess the functionality and ensure readiness of mapping-related equipment, including a new state-of-the-art EM 304 multibeam sonar transducer.

The 2021 EM 304 Sea Acceptance Testing and Mapping Shakedown will be split into two legs. The first leg will be a sea acceptance tests (SAT) for the EM 304 transducer (April 16 - April 23), and the second leg will continue with annual testing of all mapping equipment followed by exploratory mapping operations on the Blake Plateau as time allows (April 25 - May 10). The expedition will begin in Key West, Florida, and end in Port Canaveral, Florida. 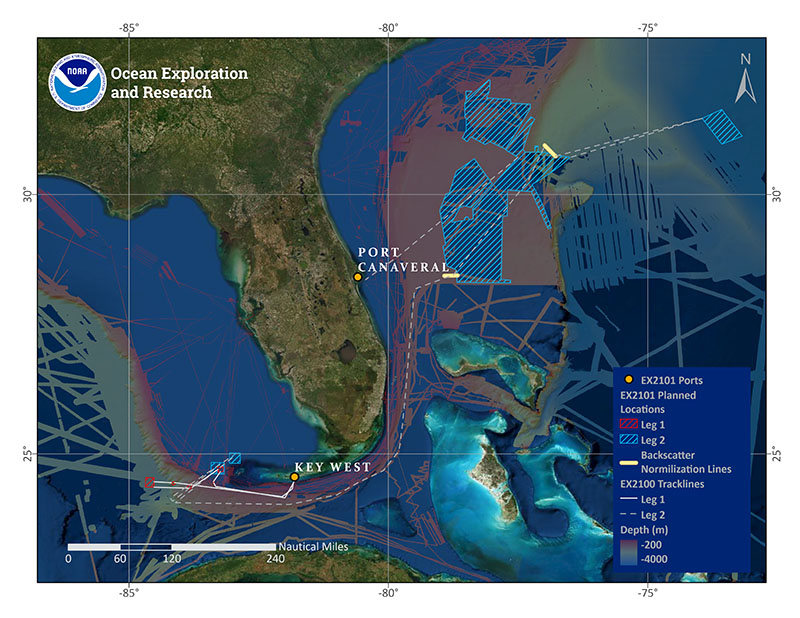 The upgrade of the multibeam sonar transducer will complete the transition from the ship’s EM 302 (installed in 2008) to Kongsberg’s new EM 304 multibeam sonar, which began with the 2020 install of the EM 304 processing unit. The design of the EM 304 should improve the quality of the mapping data collected and coverage achievable for seafloor mapping, thereby increasing the efficiency of deep-sea mapping work completed by NOAA Ocean Exploration.

The sea acceptance tests conducted during the first leg of the expedition will quantify these improvements and calibrate the system for optimal performance. As this is one of the first complete EM 304 systems in operation worldwide, the testing performed during the SAT will be invaluable not only to NOAA Ocean Exploration, but also to the broader ocean mapping community.

Following the SAT, the primary focus during the second leg of the expedition will shift to annual testing and integration of all mapping systems used during operations on Okeanos Explorer. This will include calibration of the EK60/80 split-beam echosounders , collection of backscatter normalization data, sonar interference and synchronization testing, and checks of the functionality and consistency of onboard sound speed profiling equipment.

During the second leg, a shore-based team will also be testing the implementation of a new capability for ocean mapping operations: the use of internet-based cloud services to conduct multibeam sonar data processing by a geographically dispersed team of seafloor mapping experts and explorers-in-training.

Cloud computing is one of the six key science and technology focus areas highlighted by the NOAA Science Council, and NOAA Ocean Exploration scientists are working with cloud developers to create an environment where multiple experts and interns can simultaneously work on data processing from their home offices. This effort is in response to a short-term NOAA requirement to reduce onboard mission personnel to help mitigate COVID-19 transmission risks and also advances our ongoing and groundbreaking efforts to develop capabilities for conducting ocean mapping missions using shore-based scientists, a concept known as telemapping .

Once all testing objectives are complete, mapping operations will build upon previous efforts by NOAA Ocean Exploration and other partners to map the Blake Plateau. Mapping operations will result in high-resolution maps of the seafloor and provide acoustic backscatter data information about the seabed and water column. New mapping data in this region are transforming scientific understanding of the marine habitats found here, including recent discoveries of some of the nation’s most extensive contiguous formations of deep-sea coral reefs.

This expedition is part of the Atlantic Seafloor Partnership for Integrated Research and Exploration (ASPIRE) campaign, a major multiyear, multinational collaborative field program focused on increasing our collective knowledge of the North Atlantic Ocean in support of the Galway Statement on Atlantic Ocean Cooperation, an initiative between the United States, Canada, and the European Union to advance knowledge of the Atlantic for improved ocean stewardship and understanding.