Autonomous underwater vehicles, or AUVs, are independent underwater robots used to explore our ocean. Unlike remotely operated vehicles (ROVs), AUVs are untethered from a ship, allowing the robots to complete pre-planned missions without direct control from an operator. After being deployed, an AUV collects high-resolution data, which are stored within the vehicle and collected by researchers once the AUV has surfaced.

Since their development in the 1960s, AUVs have been key players in ocean exploration. By the 1980s, AUVs were also being developed to specialize in deep-sea mapping. Now, AUVs also protect our ocean through their use in military surveillance. The expansive application of AUVs has resulted in a wide array of AUV shapes and sizes. Some AUVs are built in torpedo shapes with powerful thrusters to move quickly through the water, while other AUVs have a wider body to sustain crushing pressures thousands of meters below sea level. 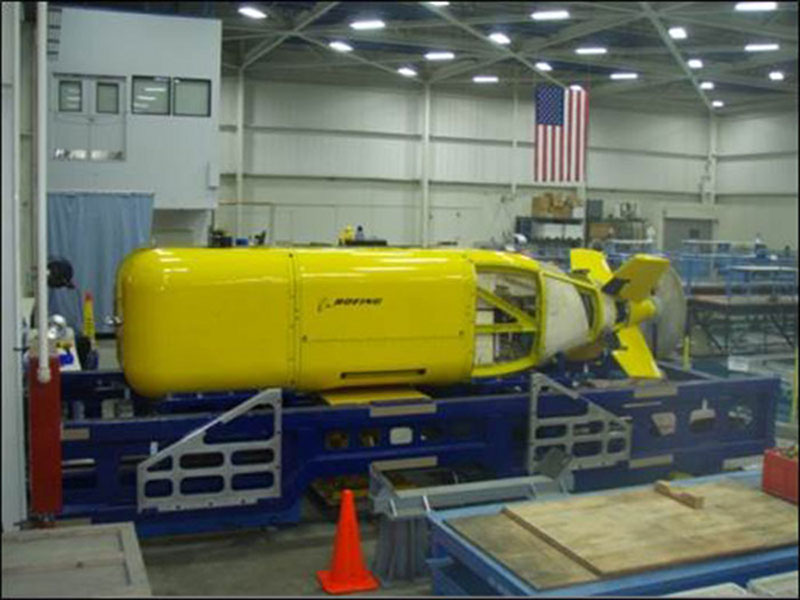 Autonomous underwater vehicle Echo Ranger in the lab prior to a 2014 mission to study rockfish in the Pacific Coast. The robot includes sonar sensors and camera systems to identify and track biological activity. Image courtesy of Boeing. Download largest version (jpg, 81 KB).

A benefit of AUV technology is they can operate without direct command from an operator. Researchers design the AUV’s trajectory and mission before a dive, then deploy the AUV, and later retrieve the robot and download the collected data for processing and review. This efficient process gives scientists the freedom to work on other projects while the AUV is diving. AUVs also can be more compact and lighter than ROVs, meaning they can be transported on smaller, more cost-effective ships. This versatility allows multiple AUVs to be deployed in one area, resulting in widespread surveillance of the seafloor and water column.

Some AUVs are solar powered, yet most AUVs carry a specialized battery within their bodies to self-power their dives. AUVs also contain various sensors that can measure a wide range of ocean characteristics, including water quality and geological makeup, which allows the submersibles to cater to the needs of their specific expeditions. For example, AUVs are often used to create detailed maps of the ocean floor with sonar sensors, yet they can also focus on photographing and imaging through the use of LED lights and cameras.

When autonomous underwater vehicle Remus 6000 completes a planned dive, it holds its position underwater until called to the surface for recovery onboard the vessel it was deployed from. This AUV typically “flies” 45-50 meters (148-164 feet) underwater and surfaces when it must update its GPS position via satellite modem connection on the host ship. This satellite communication allows some acoustic information to be wirelessly transmitted, though raw data are not collected until the end of the research mission. Image courtesy of Inner Space Center and the University of Rhode Island. Download largest version (jpg, 370 KB).

AUVs are unique in their ability to use their various shapes, sizes, and sensors to specialize in unique underwater research missions. As AUVs become more common submersibles and advance with the improvement of artificial intelligence and machine-learning technology, their data storage, sensor sophistication, cameras, and LED lights continue to be improved. Whether propelling through the water column or skimming above the ocean floor, AUVs are helping pave the way for more advanced and efficient ocean exploration. 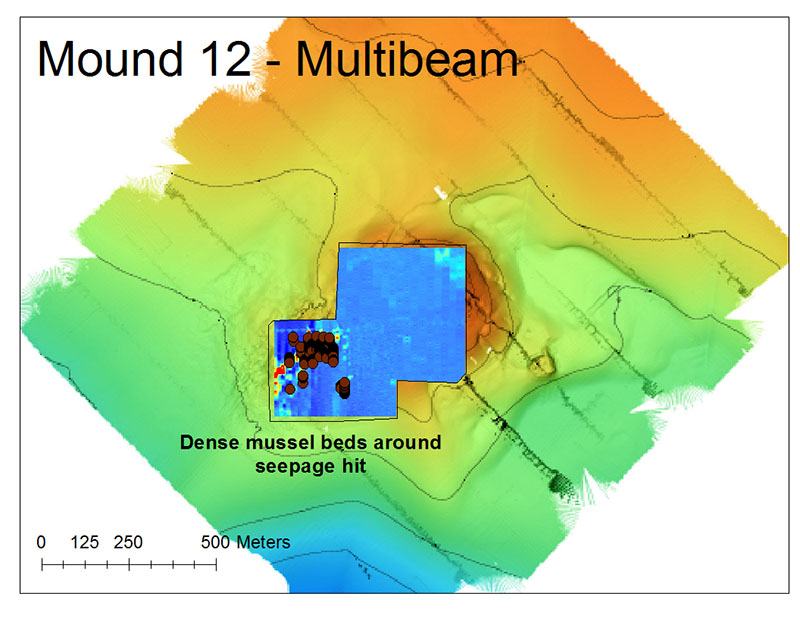 Autonomous underwater vehicle Sentry’s multibeam sonar mapping can be used to depict the bathymetry of the seafloor. Studies like this help scientists find and measure geological features of interest, such as the large mound detected on the seafloor Map created by Alanna Durkin. Download largest version (jpg, 477 KB).