Uncrewed surface vessels, or USVs, roam the ocean’s surface like boats, collecting oceanographic and atmospheric data, but without a human aboard. Operators at sea or on shore can remotely control USVs or program them to conduct pre-planned missions and make decisions with minimal real-time human input. 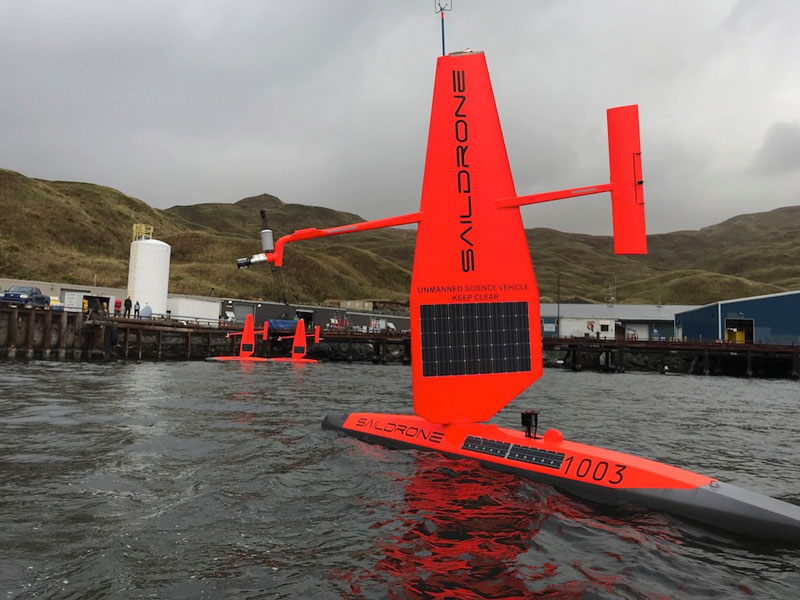 Predominantly powered by wind and solar energy, Saildrone uncrewed surface vessels (USVs) are capable of operating in harsh and remote environments for extended periods of time, from three months up to a year, with minimal supervision, collecting and transmitting oceanic and atmospheric data to shore in real time. The three current Saildrone USV models range in length from 7 to 22 meters (23 to 72 feet) with varying payloads and capabilities. NOAA has used Saildrone USVs in the Arctic, Pacific, Atlantic, and Southern oceans to track fish and mammals, measure ocean acidification and carbon dioxide, map the seafloor, and observe oceanic and atmospheric interactions from inside a hurricane. Image courtesy of Saildrone. Download largest version (460 KB).

How do they work?

There is no single design for a USV. A USV may be purchased commercially “off the shelf” or custom built. It may resemble a motor boat, sailboat, spaceship, surfboard, or even a large bathtub toy. Ultimately, its form and other characteristics will depend on its function. What does it need to do? Where does it need to go? How long will it take to get the job done? Answers to these questions and more will help determine its sensor payload and power, size, and type of propulsion. Today, many USVs and the systems they carry are powered by wind, the sun, the waves, and/or other forms of renewable energy.

USVs are typically deployed from a ship or a pier, and some even have their own deployment systems. They may operate with a ship, on their own, or with other USVs. Or, they may work with autonomous underwater vehicles (AUVs) and remotely operated vehicles (ROVs), collecting related data and providing their subsea counterparts with navigational support, instructions, and the communications link that enables real-time communications, monitoring, and data sharing. Some even serve as a mobile docking, data-transfer, and recharge station for other uncrewed systems. 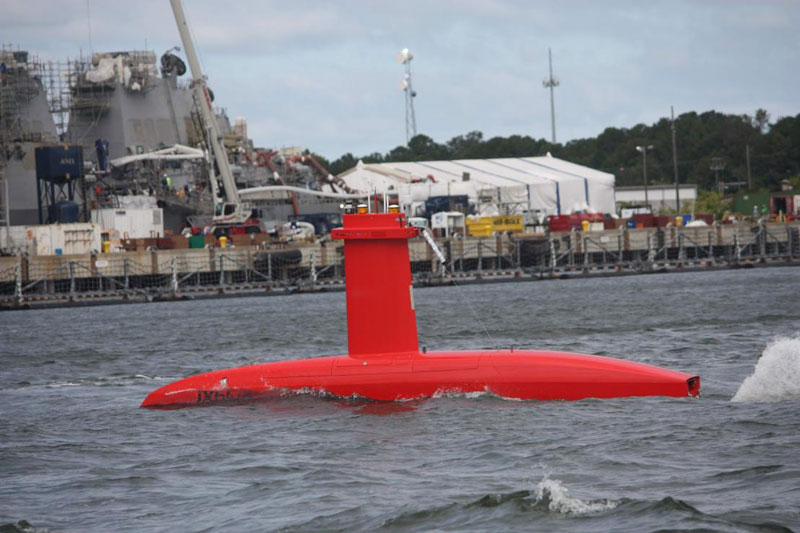 DriX is a 7.7-meter-long (25-foot-long) submarine-shaped uncrewed surface vessel (USV). DriX is diesel-powered and able to conduct both remote-controlled and supervised-autonomous operations. The customizable DriX can carry a multitude of sensors and can be paired with underwater vehicles, tracking and directing them via an acoustic modem. NOAA has tested DriX as an additional mapping platform alongside NOAA Ship Thomas Jefferson and has supported the use of DriX to map the nearshore seafloor of Papahānaumokuākea Marine National Monument in tandem with deepwater mapping operations from Exploration Vessel Nautilus. Image courtesy of Ocean Exploration Trust. Download largest version (360 KB).

In addition to communications and navigation instruments, USVs can be equipped with many of the same sensors as ships, AUVs, and ROVs. Sensors collect data about the environments both above and below the surface of the ocean, often sending them to ship and/or shore via satellite in real time. Oceanographic data include bathymetry, water temperature, salinity, dissolved oxygen, currents, wave height and periods, and sound. Atmospheric data include air temperature, wind speed and direction, atmospheric pressure, and humidity. USVs may also carry cameras to capture video and still imagery and systems to collect water samples. 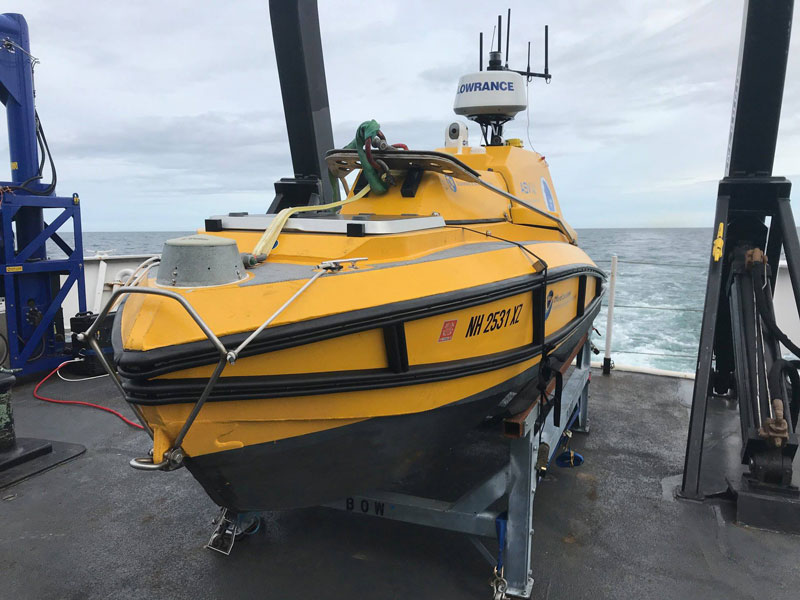 C-Workers are a family of uncrewed surface vessels (USV) used for a variety of applications with varying levels of autonomy. The USV shown here is a custom-built C-Worker 4, the smallest of the C-Workers. This 4.2-meter (14-foot) diesel-powered, shallow-water USV is equipped with standard mapping equipment. NOAA has deployed it from a NOAA ship to map portions of Alaska’s Arctic seabed and from shore to map portions of Thunder Bay National Marine Sanctuary’s lakebed while also searching for shipwrecks. Image courtesy of NOAA’s Office of Coast Survey. Download largest version (1.2 MB).

Why are they important?

USVs are also starting to be used for purposes other than data collection, including as cargo “ships” and passenger ferries.

USVs are quickly becoming a favored tool in the ocean science toolbox, and their capabilities are rapidly advancing. In general, USVs are more efficient than traditional ship-based operations. They’re cheaper, more environmentally friendly, and safer (since people don’t have to go to sea). In addition, they can access remote and hazardous places and advance AUV and ROV operations and are deployable from almost anywhere. And, USVs powered by renewable energy can operate for long periods of time. Nevertheless, USVs won’t replace ships, people, AUVs, or ROVs. Rather, they will be used with them, balancing the strengths and weaknesses of each, to increase the scope, scale, and pace of data collection. 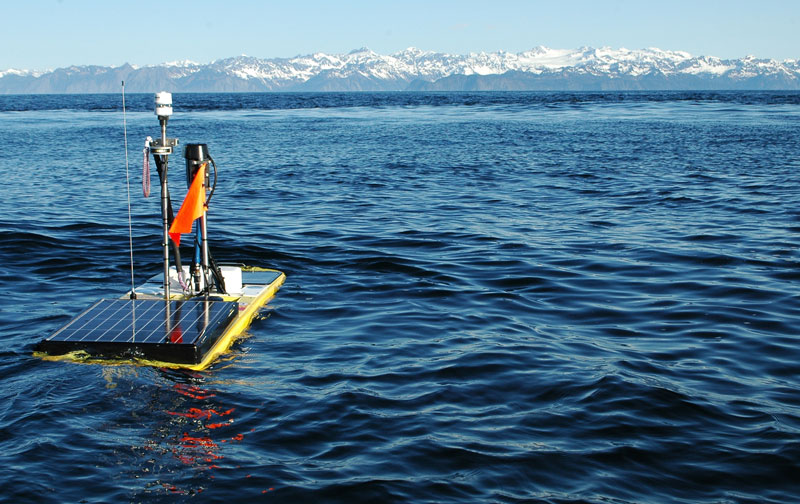 Wave Gliders use wave energy for propulsion and solar energy to recharge their electronic systems and sensors, enabling them to travel hundreds of miles and operate for up to a year. Each Wave Glider consists of a surface float connected to a subsea unit that controls speed and direction along a programmed or remotely piloted path. NOAA has used Wave Gliders to study humpback whales in Papahānaumokuākea Marine National Monument, melting glaciers in Alaska’s Prince William Sound, and environmental changes in the Arctic and to inform weather forecasting. Image courtesy of NOAA’s Pacific Marine Environmental Laboratory. Download largest version (3.3 MB). 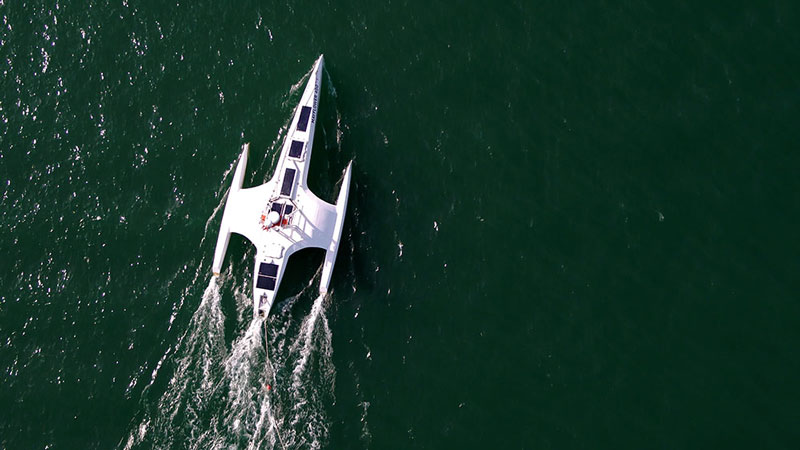 On June 30, 2022, Mayflower Autonomous Ship (seen here during its sea trials) arrived in Plymouth, Massachusetts, having crossed the Atlantic Ocean from Plymouth in the United Kingdom, collecting scientific data along the way. NOAA scientists contributed to the success of its journey, similar to the one the Pilgrims took 400 years ago. At 15 meters (49 feet) long, this uncrewed surface vessel is the largest to cross the Atlantic navigated by an artificially intelligent “captain.” Powered by a solar-driven hybrid electric motor and loaded with more than 50 sensors, Mayflower Autonomous Ship was designed to help safeguard the future of the ocean. Image courtesy of IBM. Download largest version (126 KB). 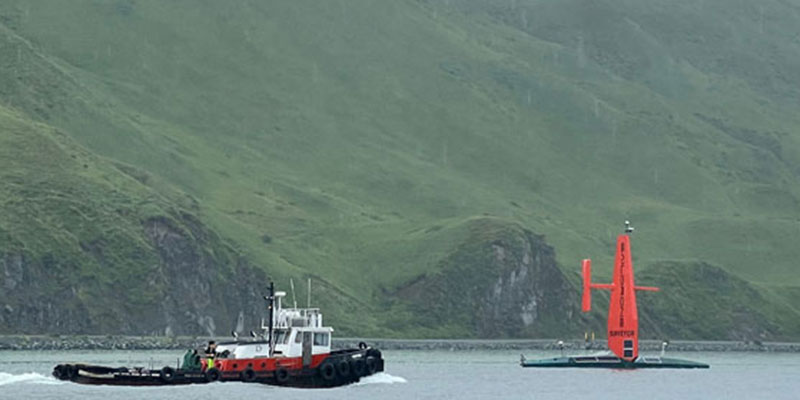 A World First: Ocean Drone Captures Video From Inside a Hurricane