This method, however, is not limited to use underwater. It can handle virtually any object that can be photographed, above or below the water. When the object is a historic shipwreck in 200 feet of cold, fresh Great Lakes water, however, it is a powerful tool for rapid, detailed, and comprehensive documentation. Moreover, as a means of completing baseline documentation, photogrammetric models greatly expedite all subsequent archaeological research efforts.

Most of the ‘work’ involved in photo modeling takes place on a computer, within a software interface. The data acquisition phase—divers in the water taking pictures—constitutes a small fraction of the overall workflow. For example, the photo models completed during this research phase took 60-80 hours to process from start to finish. The pictures used to create the models were taken by divers during the 20 to 30-minute bottom time allotted for deep, technical dives.

To capture the images, dive teams carrying underwater cameras swam pre-planned patterns over archaeological sites while taking hundreds of photographs along the route. In order to generate a complete photo model, the divers acquired complete photographic coverage of a vessel’s underwater remains. In other words, they took multiple, overlapping photographs of every object around the exterior of the shipwreck: its hull, deck structures, masts and rigging, even debris on the lake floor nearby.

The three-diver bottom team dynamic is demonstrated here where NOAA Divers John Bright (center of image) and Joe Hoyt (taking the photograph) move in tandem down the length of bulk carrier Norman capturing imagery while the in-water safety diver—Eastern Carolina University Reciprocity Diver Mark Keusenkothen (top left)—hovers above and in between each diver. The in-water safety diver swims in a position where they can render immediate assistance to either bottom diver, while also trying to stay out of the frame as the photographers image the vessel’s remains. While capturing the upper edge of Norman’s starboard deck, Joe Hoyt also got Mark hovering in the frame. Image courtesy of NOAA, Thunder Bay National Marine Sanctuary, Monitor National Marine Sanctuary. Download larger version (jpg, 6.4 MB).

As the two divers with cameras swam parallel and a short distance apart from each other, they also maintained a constant altitude above the bottom. In tandem, they slowly moved along the long axis of the vessel’s remains, constantly snapping pictures. A third, in-water safety diver escorted the team, hovering a short distance above, behind, and equidistant from each diver taking photographs. This member was the ‘eyes and ears’ of the dive team, monitoring each diver’s status, environmental conditions, and tracking the team’s decompression dive plan parameters. This allowed the other two divers to more comfortably focus on collecting quality imagery.

To ensure accurate and consistent photo model results, each diver carried an identical camera, lens, and waterproof housing setup. Once on the bottom, they paused to synchronize the camera’s settings to account for ambient light conditions, which often vary at depth. By establishing consistency in the camera settings, two divers greatly increased the efficiency of fully imaging the shipwreck.

In a 20 to 30-minute bottom time, divers collected thousands of individual images. Once the bottom portion was complete, the team began their ascent and decompression phase of the dive. As they ascended from the depths, they were met by additional support divers to help manage gear, monitor the decompression stops, and supply redundant equipment and breathing gas in the event of an emergency. After safely completing the decompression phase of the dive, all the divers exited the water with their camera’s memory full of photographic data.

A series of individual images shows the progression of camera perspectives as a diver moves from the stern of bulk carrier Norman towards the bow. Eight photos are shown here; over 1,600 of these images were collected by four divers during two separate dives to obtain complete coverage around the 296 foot-long vessel and its surrounding debris field. Divers would work their cameras at numerous angles, capturing images at varying depths and positions to produce a highly detailed photogrammetric model. Image courtesy of NOAA, Thunder Bay National Marine Sanctuary, Monitor National Marine Sanctuary. Download larger version (jpg, 3.5 MB).

The sequential steps of producing a basic photogrammetric model. From top to bottom, the initial alignment of images and point cloud generation. Next the dense point cloud, followed by blank mesh interpolated from the dense points. The textured mesh uses the pixel values from the original images to assign color values across the surface of the solid mesh. This model used 572 images to render a nearly complete representation of schooner John J. Audubon, which sank in 1854. At the time of its sinking, the schooner was carrying a cargo of railroad iron which can be seen scattered on deck (along with masts and rigging) and around the vessel on the lake floor. Image courtesy of Thunder Bay National Marine Sanctuary/NOAA. Download larger version (jpg, 2.4 MB).

Back in the office, the bulk of the photogrammetric processing work began. Images were transferred and merged from each camera into a single directory. Photographic adjustments to the color balance, exposure, etc., were applied to the dataset to ensure all the features of the shipwreck were in focus and illuminated.

Next, all the images were loaded into the photogrammetric software interface. Once imported, the first step of photo modeling began: alignment and basic point cloud generation. Here, the software program used a content-aware algorithm to detect common features within the multitude of images. Once detected, the relative position of the images to each other was determined, and the features themselves were mapped as individual points. Next, this preliminary point cloud was reviewed and edited, preceding the generation of a hyper-detailed dense point cloud. Depending on the number of photographs taken, the point cloud generation could take many days to complete.

Once complete, the dense point cloud got smoothed into a solid surface, or ‘mesh.’ Each individual point became a nodes or vertices to structure the solid surface; a three-dimensional version of connect-the-dots. The resulting mesh, however, had no color or texture. It was essentially a blank, digital, canvas. Thus, the software program then returned to the original images and determined the pixel (color) value for each feature. Each pixel value then got placed into the mesh. Repeated until completion, a photo texture was developed for the entire model, giving it a realistic appearance.

By the time this process finished, the researchers had a three-dimensional, scaled model with a photographic texture ‘painted’ over its surface. This highly detailed model enabled archaeologists to interact with a site virtually, without the time constraints or safety risks of technical diving. Instead, every facet of the site was reviewed remotely, from the comfort and safety of a computer.

Important structural elements, such as the deck cabins, cargo holds, framing member, and rigging, were observed. As a baseline record, these photomodels will also be compared to models generated in the future to track changes across the site through time. They are also useful for exploring debris fields around the vessel. Likewise, they are impressive education and outreach tools that enable anyone to interact and view a historic shipwreck site.

Isometric perspective of the photogrammetric model produced at the site of wooden bulk carrier New Orleans during Phase IV ‘work-up’ dives. This view shows the collapsed stern structure around the boiler and engine, the break at the start of the cargo holds, and the upright remains of the cargo holds and bow. Image courtesy of NOAA, Thunder Bay National Marine Sanctuary. Download larger version (jpg, 505 KB). 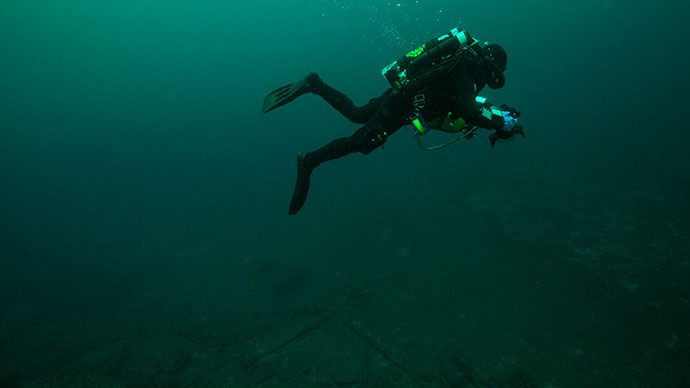 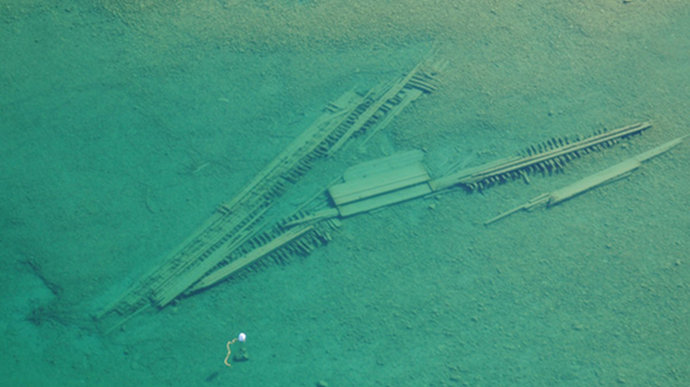 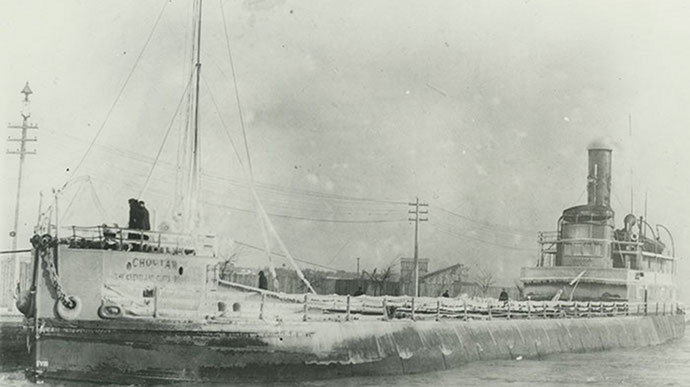 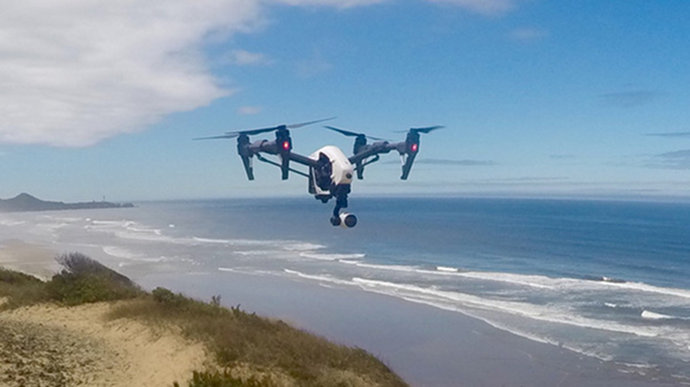