Split-beam sonar is a type of active sonar that uses sound to explore the composition of our ocean. Whether attached to the hull of a ship, a pole mount, an autonomous underwater vehicle, a water column profiling system, or even stationary on the seafloor, this machine works by emitting a single vertical sound pulse called a “ping” at a specific frequency, then listening for the echo’s return. This pulse provides information about the biology and geology beneath the sea’s surface. While split-beam sonar can be tailored to the expedition goals, lower frequencies are especially useful for detecting anomalies on the seafloor, surveying organisms throughout the water column, and estimating biomass for fisheries.

How Does It Work?

Split-beam (or single beam) sonar is composed of two key parts: a transducer, which acts as an underwater speaker that sends and receives sound pulses down through the water column, and a transceiver, or a topside unit that works from the ship to control the settings of the transducer pings and convert the returning raw sound energy into usable data. 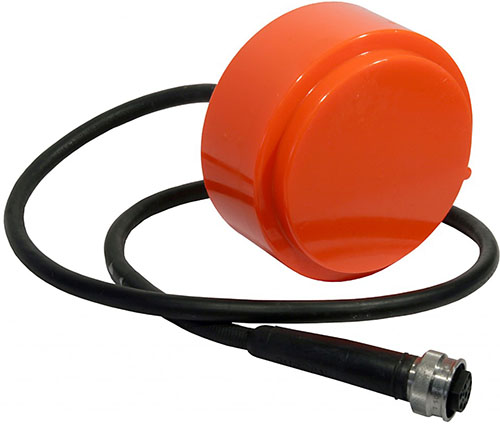 This split-beam transducer is mounted on the hull of NOAA Ship Okeanos Explorer and acts as an underwater speaker. It first emits a ping at a specific frequency (measured in kilohertz) from the orange transducer. This soundbeam expands the deeper it travels through the water column. When the ping hits anything with density and/or sound speed difference within the surrounding water, the sound echoes back and is received by the orange component of this transducer. Split-beam sonar transducers are unique because the transducer is capable of both emitting and receiving the sound, whereas multibeam sonar systems have separate transmitter and receiver arrays. Image courtesy of Simrad. Download larger version (jpg, 231 KB).

Unlike multibeam sonar, which uses multiple transducers to cover a large swath of territory for mapping, split-beam sonar uses only one transducer to emit single beams of sound that travel vertically down the water column. As its name suggests, the “split-beam” technology refers to the unique “x” shape that the emitted sound waves form. The crossed-over sound beams help track where exactly an object is, which provides more detail than other single beam sonars. Much like a flashlight beam, the sonar ping expands the deeper it travels, which forms a cone of emitted sound. When the ping hits any object with a density or sound speed different from the surrounding water, the ping will bounce off of it and return to the split-beam transducer. 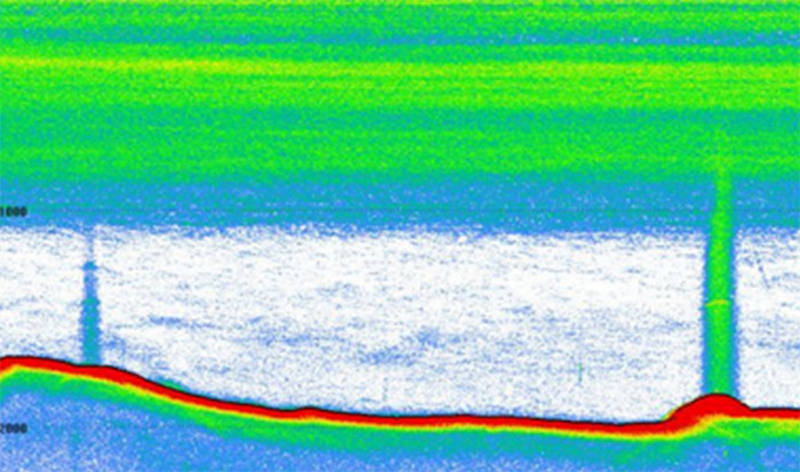 Echogram produced by split-beam sonar during the 2017 Discovering the Deep: Exploring Remote Pacific Marine Protected Areas Okeanos Explorer expedition. This echogram depicts the pings that have returned back to the transducer as the ship moved. The red feature is the seafloor, where there is the greatest quantity of backscatter, indicating a hard bottom. The upper blue and green areas depict dense layers of biology that reflect less sound. The two large vertical lines indicate the presence of air-bubble plumes that are emanating from the seafloor; air has a different sound speed when compared to water, so split-beam sonar is able to detect these seafloor seeps. This map helps scientists identify regions that require more exploration. Image courtesy of the NOAA Office of Ocean Exploration and Research, Discovering the Deep: Exploring Remote Pacific MPAs. Download larger version (jpg, 79 KB).

The depth of an object is computed by measuring the time it takes for the ping to leave the transducer, hit the object, and return to the transducer. The longer the sound takes to return, the deeper the object is from the transducer. Split-beam sonar also collects information on backscatter, which can provide details about the composition of an object. For example, if the seafloor is hard and rocky, there will be more returning sound, whereas a muddier or softer seafloor will absorb much more of the ping, resulting in a weaker echo. Backscatter can also give scientists information about objects within the water column, such as fish, bubble plumes, and maritime heritage sites.

As the platform moves, the split-beam sonar collects data about where objects lie in the sound path, then sends the information to topside or built-in computers. This collected information is processed by scientists, who convert the data points into a map that visualizes depth range. This visual representation of sound is called an echogram.

Why Is It Important?

Some split-beam sonars, along with multibeam sonars, have a lower frequencies than other sonar systems, which makes split-beam ideal for traveling long distances to map both the seafloor and water column. Split-beam sonar can be used alone to study the seafloor’s general geologic shape and makeup, or with other sonar systems to generate wider, more expansive maps in high quality. Mapping not only helps with ocean science, but also with oil and gas exploration, allowing split-beam sonar to be respectively categorized as a Science-Class or Working-Class system.

Beyond mapping, split-beam sonar is key in exploring the biological composition of our water column. By detecting organisms within our ocean, scientists study habitat composition, biologic distribution, and fish stock assessment to understand the health of our ocean and the diversity in our waters. Split-beam sonar is a key tool for water-column dives, which are remotely operated vehicle dives that work to study and record diverse ocean life. 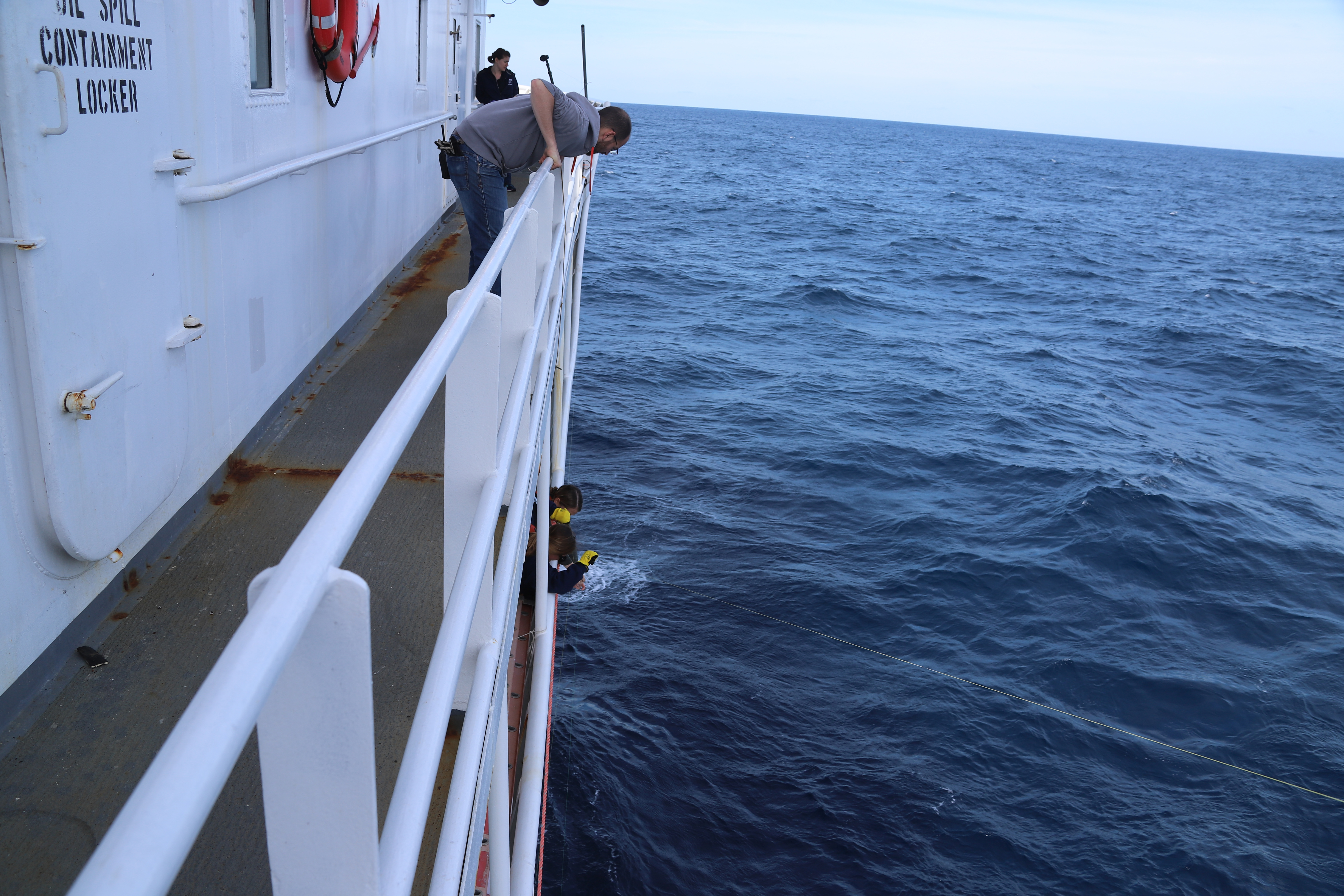 During the 2018 Gulf of Mexico Technology Demonstration, the calibration team leans over the Okeanos Explorer to attach calibration spheres on a large fishing pole line called a “spectra line.” To maintain accuracy, split-beam sonar systems require calibration, which is carried out by dangling metallic spheres 15-20 meters (49-66 feet) below the hull of the ship so that the sonar systems can ensure proper and accurate target strength readings. Image courtesy of the Gulf of Mexico Technology Demonstration. Download larger version (jpg, 9.2 MB).

Biological and geological mapping is an important first step in ocean exploration. By gathering information on the size, location, and orientation of objects within the water column and along the seafloor, scientists continue to uncover new sites and organisms that require further investigation with the help of submersibles. Whether mapping maritime heritage sites, biological behavior patterns, underwater habitats, or the mountains and ridges of our seafloor, split-beam sonar is an effective tool for exploring the makeup of our ocean.

SONAR, short for SOund NAvigation and Ranging, is a tool that uses sound waves to explore the ocean. Scientists primarily use sonar to develop nautical charts, located underwater hazards to navigation, search for and identify objects in the water column or seafloor such as archaeology sites, and to map the seafloor itself. With a sonar survey, a platform is equipped with a group of physical sensors, called a transducer array. This array emits an acoustic signal or pulse of sound into the water. If an object is in the path of the sound pulse, it bounces off the object and returns an “echo” to the array. The array can then measure the strength of the signal. By determining the time between the emission of the sound pulse and its reception, the range and orientation of the object can be determined.

Water Column Exploration Gets an Upgrade (2021)

Finding a Needle in a Haystack: Calibrating the Okeanos Explorer Split-Beam Sonars (2018)

Introduction to Sonar and Multibeam Mapping